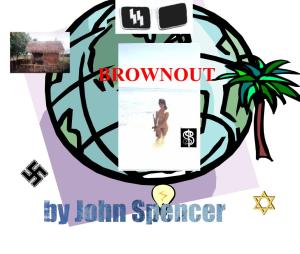 Brownout – 666 a current and sexy story about the Philippines and why the world doesn’t tick.
A story of political suspense, with crime and court elements, set against a background of romance and sexuality, in multicultural settings across several countries this novel attempts to find out why the world doesn’t tick so well. From steamy and graphic sex scenes to the highest political intrigue it searches the floundering of the human race.

In the land of flaunted sex, money, and flexible rules, an ambitious but lonely Rick Daly faces his demons.

Rick Daly has established a business in the exotic surroundings of the Philippines, while simultaneously discovering Marilyn Delgado, the woman of his dreams.

However, a clash of cultures and his own naiveté lead to disaster. Falsely accused of a sexual crime, Rick loses both his freedom and his business. To add insult to injury, a prison escape merely amounts to switching jails.

In a world where the rich prosper, honest individuals are forced to the wall, and a cynical disregard for all but the dollar is destroying society from within, crime soon follows punishment for Rick. Close to losing his soul, will Rick’s ultimate success in drug and arms dealing finally lead him to face up to reality?

To purchase this book, either as eBook or as an author-signed paperback, please go to http://www.creativityandpower.com